Yesterday was terrible. Scratch that, it was scary! Typhoon Glenda (international name: Rammasun) hit Central Luzon (which includes Manila) and Southern Luzon (which includes Bacoor) with its strong and deadly winds. Once again, it made us feel how vulnerable we are to the forces of nature. Trees got uprooted, house roofs flew away, glass walls were shattered, electric posts and billboards fell down, many areas got flooded and hundreds of families got displaced. Thankfully, only several casualties were reported.

Most of us survived typhoon Glenda with minimal to zero damage to our properties, and so we have to be really grateful. The hubby and I were at my PILs’ place yesterday and everything was quite manageable. Power went out in the morning but came back just before dusk. For many areas, power hasn’t been restored yet so we consider ourselves lucky. 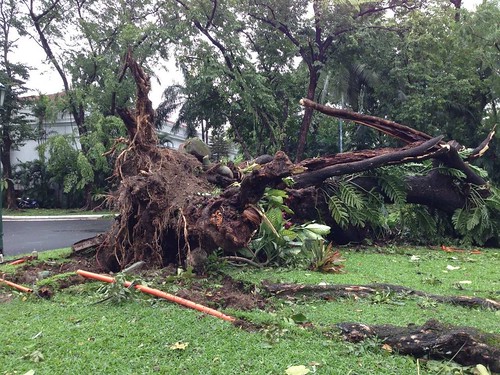 so sad, this more than 100 years old acacia tree near our office building fell down because of typhoon Glenda!

In Bacoor where our marital home is, our good neighbor said our house is safe. No damage whatsoever except for leaves scattered in our balcony because of the strong winds. It just needs some sweeping, that’s all. Our other neighbor had a little misfortune. An electric post fell down and hit the back of his car. If he has car insurance, though, that won’t be much of a problem. I hope he has.

The rented apartment here in Manila where my parents and siblings stay, on the other hand, didn’t get spared. The flushing of its roof got detached and it resulted to some leaks inside the house. Good thing their landlord responded easily to their call for help. He immediately sent two men to repair the flushing and after an hour, everything went back to normal again. My mom was so delighted with the efficient service that she gave the two men merienda money.

According to weather reports, Typhoon Glenda has already left Philippine territories but the last time I checked, it’s still raining outside and another tropical depression is forming.

4 Replies to “Dealing with #GlendaPH”