While working in the office last Chinese New Year, I received this photo from the hubby via Viber with a caption that said, “Happy 5th Birthday Nissen :)” (Nissen is the name of our car.) Suddenly, I felt my eyes brightened and my heart swelled with happiness. I knew it was going to be this month but the exact date eluded my memory. Fully-paid na kami sa car, yeeeeees! One major debt down, one more to go (a.k.a. our Bacoor house)! 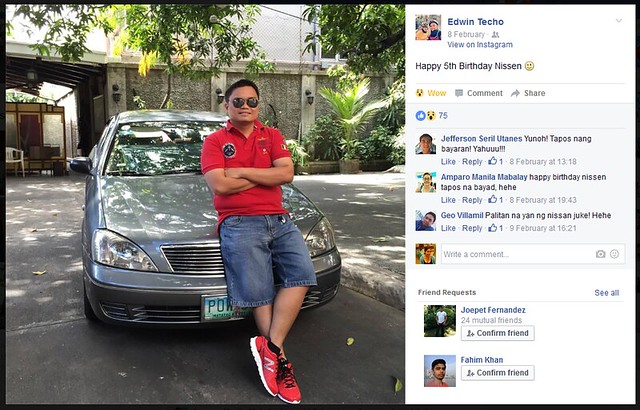 The hubby got Nissen on February 8, 2011 through a car loan with a local bank, several months after he started paying mortgage on our Bacoor house. His parents sort of forced him to make these two big purchases one after another because they believed that if we were to get married, we should have a house and a car first. A house, and then a car, in that order. A house, because we need a roof over our heads. A car, because the distance between the location of our chosen house and our workplace was asking for it. Siyempre, kasama na rin ang convenience factor doon!

The hubby’s parents were very supportive of these two big financial moves. They helped him pay for the down payment of both the house and the car. You could say he’s a lucky child (and I’m a lucky wife) and it’s true. After we got married in 2012, we immediately talked about how I could contribute to paying down our house and car loans. The arrangement we made at that time remains the same to this day. We had been looking forward to this moment when we finish paying off our car loan and it has finally arrived! Ang saya-saya lang!!!

A big financial burden has been lifted off our shoulders and it feels so good. Paano pa kaya kapag yung house na ang natapos naming bayaran? Mas masaya yun tiyak! I just hope and pray God continues to give us the means to eliminate our debts one by one. It’s still a long way to go with our house loan (it’s a 15-year mortgage and we’re only approaching our 6th year) and so we’ll just keep on working hard and dealing with it one monthly payment at a time.