Last night, I watched Man of Steel at SM Manila. I was with the hubby, my mom and my sister Jodie. One word to describe it: awesome. The visual effects were astounding and it didn’t hurt that the lead star, Henry Cavill, was super duper hot! I love him already. 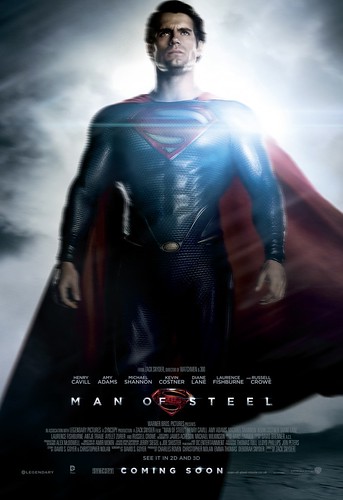 Directed by Zack Snyder, Man of Steel is a 2013 American superhero film. It’s actually the newest Superman movie with a twist. I liked how they made it look futuristic and contemporary at the same time. The crucial flashback scenes blended well with the story. The action scenes were nicely-choreographed I couldn’t blink my eyes for fear that I’d miss a moment. Haha.

Henry Cavil as the new Superman fits him to a T. I enjoyed staring at his gorgeous face and his strong, well-muscled body. His distinct, manly voice is also perfect for the role. He actually sounds like a god to me. Just kidding. Anyway, Clark Kent here is again paired with Lois Lane (played by Amy Adams). I thought they had chemistry.

Superman has a new costume in this movie. It has the same logo but in a darker tone. It actually resembles the black Spiderman costume with tighter spandex and without the brief.

I know I’m far from being an authority (I’m just an ordinary girl who occasionally shares her movie-related thoughts online) when it comes to declaring which movies are good and which are bad, but I’m telling you, Man of Steel is a must-see film and I’m betting it will be a smashing success in the box office (or is it already?). I can’t wait for the sequel. I heard it’s in the works now and will be shown next year! 🙂