Yesterday being a Saturday was work-free for me, just like for the majority of government employees here in the Philippines. But just because it was work-free doesn’t mean it was gonna be laidback or boring. I actually had a long day. And so was the hubby.

After lunch at home, we attended the joint birthday celebration of our friends Mac and Ella’s two adorable children at West Avenue in QC. The theme was basketball and there was a minion mascot. There were food booths serving sweet and tasty treats to the delight of children and adults alike. The merienda/early dinner food from the buffet was great and the children had a happy time with the hilarious host who doubled as a fantastic yoyo master. I have to give credit to the parents for pulling off such a fab and fun party. (Thanks again for inviting us, guys!) We left the party at past 6pm and drove home to Bacoor. 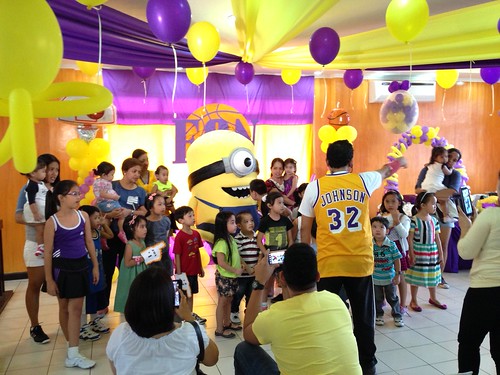 We actually had another kiddie party invite somewhere in Manila but the hubby decided to beg off at the last minute because he had an emergency meeting with the officers of our village. He was the Vice President and he needed to be there so he did what was expected of him. The meeting ended a little past 10pm. There was also an event happening simultaneously at our village’s clubhouse (sort of a singing competition) which we watched for a couple of minutes before going home and calling it a night.

Thank you Lord for the gift of a long Saturday. We had so much fun and learned a lot yesterday. Today is another day and the hubby and I so look forward to enjoying it at home. After hearing the morning mass, it’s just gonna be a sleep-eat-watch TV-cuddle-eat-sleep kinda Sunday for us. 🙂