I’m still thinking if I’ll get a hair cut or not. My hair has gone so long in the last few months and I’m getting tired of managing it. On normal days, you will see my hair tied in a pony tail. Whether it’s at work or home, my hair is just like that. I’m really unimaginable when it comes to hair styles so I usually go for short hair, if I can help it. 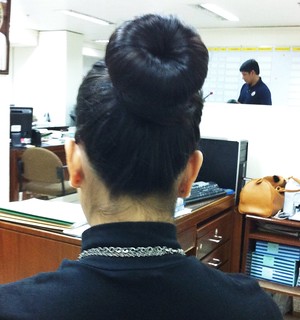 I’ve known about donut bun hair style from a fashion blog I occasionally read. I like how neat and elegant it looks, but it sounds like so much hard work so I didn’t think of doing it to my hair. But when I saw my superfriend Nice wearing a donut bun, I couldn’t help but ask her where she bought it. She then pointed me to an accessory shop (Broadway Gems) that sells it, and in various sizes at that. So one random day at the mall, I went to that shop and got a large donut bun for myself at P59.75.

It took me a few days before I actually used it. It turned out it wasn’t as hard to do as I thought it would be. My officemates, and even my boss, liked it. They said it looks good on me. Of course, I was flattered inside but just told them my hair style is inspired by Miss World 2013 Megan Young. It’s the hair style of winners. Haha. I’ll make it higher next time, though, for a fuller effect.

Girls, have you also tried doing the popular donut bun hair style? How did it go?