Just the other day, I received an email from Citibank informing me that my credit limit has been increased once again. From P55,000, it’s now P80,000. Again, I didn’t ask for it, they just willingly gave it to me like in my previous line increase. Was it because I’m a responsible cardholder now? Yes, probably. Or maybe, they just want to lure me into spending more. Well, good luck to them because that won’t happen! 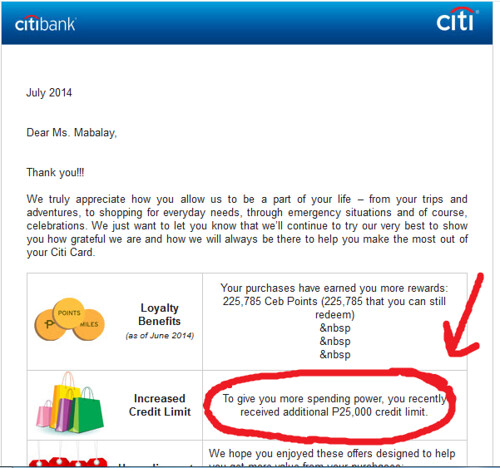 Ever since I became credit card debt-free, I’ve been paying my credit card dues in full. After learning the hard way how credit card companies make money, I started to take my credit card spending seriously. I want to give them as little profit as possible by being a responsible cardholder now.

Did you know that credit card companies make so much money from revolvers? They are cardholders who pay only a part of their dues instead of making a full payment. Their debts increase over time and before they know it, they’re already heavily indebted. It has happened to me before but I was able to turn things around through hard work and a lot of self-control. So definitely, I won’t let this thing to happen to me again. Promise.

Soon, I’d like to write about why I still use a credit card and why having just one (my Citibank Cebu Pacific credit card that has no annual fee for life) has proven to be the best option for me. 🙂