On the first week of January 2014, the hubby and I have decided to take on a money saving challenge. You may be familiar with it or may have been doing it also. It’s popularly known as the 52-Week Saving Challenge. I am sad to report that we FAILED the challenge. 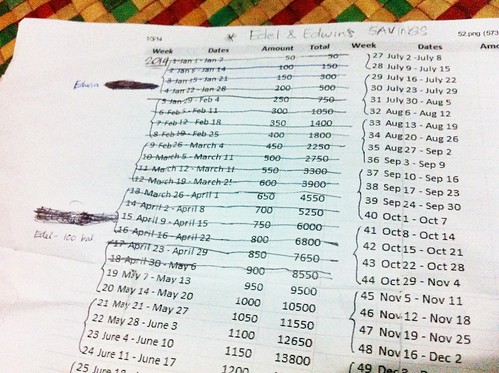 We only made it until the 18th week (April 30 to May 6, 2014). After that time, we gave up. We accepted our failure and just charged everything to experience. I can’t believe I’m blogging about this just now! I’ve gotten so busy in the past months, you know. (Naghanap pa talaga ako ng excuse!) Haha.

If there’s one good thing that came out of this challenge, we were able to use the money we saved in enrolling the hubby in graduate school last July. It’s an investment in itself; it’s something that we would benefit greatly from when the right time comes.

The challenge, therefore, didn’t really go to waste. We even learned something from it. That doing a challenge (financial or otherwise) is a serious thing. You don’t just say you’re doing it. You have to be prepared in all aspects. In our case, we thought we could do it. But some unexpected expenses came up and we had a sort of change in financial priorities that we were left with no choice but to stop. And so the challenge ended abruptly.

P.S. I once read from a certain blog about the sentiment/complaint of some people doing the 52-week saving challenge. It was mentioned there that it’s hard for them to save money, especially when you have to start saving small then the amount gets bigger and bigger each week until you reach the 52nd week. That it can eventually put a strain in one’s finances. What they think is more feasible is when you do it in reverse — start saving big then the amount gets smaller and smaller each week until you reach the final week. Hmmm, what do you think about that?

16 Replies to “A Money Saving Failure”